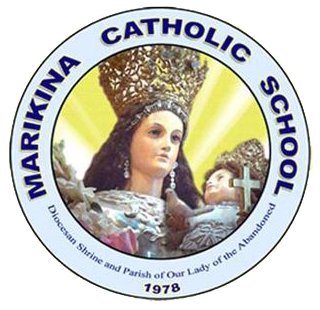 Inspired by the call of His Eminence, Jaime L. Cardinal Sin, who mandated organizations in the Archdiocese of Manila to help in the formation and education of the young, the Daughters of Mary Immaculate (DMI) and the Catholic Women’s League (CWL) of the Parish of Our Lady of the Abandoned in 1976 responded and made it their project to put up the Marikina Catholic School with the consent of the parish priest, Msgr. Jose B. Cruz. Through fund-raising activities, they raised the necessary amount to construct the first classrooms at the right wing of the back portion of the church in J.P. Rizal Street, Brgy. Sta. Elena. They also facilitated the processing of the papers for registration with the respective government agencies.

One hundred forty three (143) pupils first enrolled in 1978; Pre-School – 94, Grade I – 41, and Grade II – 8.  Higher grade levels were added every year until the eventual completion of the elementary course.  Throughout these years, the Sisters of the Daughters of Charity, who were then assigned in Boys Town Complex, provided the spiritual formation of the children until 1990.  They were replaced by teachers who were trained in the Mother of Life Catechetical Institute.

In 1981, Msgr. Cruz constructed a two-storey building with six classrooms to house the growing number of students. In the School Year of 1985-1986, the Ministry of Education, Culture and Sports (MECS) granted government recognition to the Nursery, Kindergarten and Elementary courses of the Marikina Catholic School.

Msgr. Generoso A. Mediarito started the construction of another building in 1987 and completed the project in 1989.  Msgr. Teodoro D. Perez, in 1994, added a three-storey building to house six classrooms and the parish hall. In 1999, an adjoining property was purchased to build additional rooms for the Nursery classes. Msgr. Arnel F. Lagarejos, in 2001, purchased an additional lot and constructed a two-storey building.  There are now 42 fully air-conditioned classrooms in the Pre-School and Grade School Departments; laboratories for Science, Home Economics and Computer; Library and Learning Resource Center; Multi-Media Center; Printing Office; Clinic and Canteen; and the offices of the Administration, Finance, Center for Integral Evangelization, Human Resource, Management Information System, Registrar, Guidance, Student Services, Coordinators and Faculty.

In August 2009, Rev. Fr. Paquito G. Gallego was appointed school director of the institution.  He continued the completion of the four storey building of the High School Department and initiated steps toward institutional planning and development program for Marikina Catholic School.  In April 2010, a Government Recognition was granted by the Department of Education (NCR) to the High School Department for the complete Secondary Course.  Further in February 2014, the institution was granted a Certification Status to participate in the ESC Program of the government.  Moreover, in July 2015, the school was granted a government permit to operate a Senior High School Department for the Academic Track.  The school is offering three strands, namely: ABM (Accounting, Business and Management), HUMSS (Humanities and Social Sciences), and STEM (Science, Technology, Engineering and Mathematics).

In May 2016, Rev. Fr. Gerard Joaquin V. Masangya was appointed school director of the institution.  It is during Fr. Masangya’s leadership that MCS celebrated its 40th Founding Anniversary last October 2018—culminating in the 4th Run of a Variety Show and the prestigious Mr. & Ms. MCS Pageant.  At present, he leads us in the New Normal in the implementation of our Remote Distance Learning (RDL) in the time of the COVID-19 Pandemic.