OUR LADY OF PEACE SCHOOL

History of Our Lady of Peace School

Our Lady of Peace School is a cathedral school founded in 1972 by Msgr. Vicente Fernandez who invited the Congregation of the Sisters of St. Paul of Chartres to administer the school.

Through the years of its continuous service, Our Lady of Peace School has taken to itself the spiritual, moral, social, intellectual and emotional development of its clientele, the student.

The forty-seven years of existence is a concrete proof of its commitment to service and involvement in the growth and development of the youth in the Diocese of Antipolo.

1975 – Kindergarten Course, Grades One to Four were given recognition by DECS.
Intermediate grades were offered.

1976 – Elementary Department was given recognition by DECS.
First graduation in the Elementary Dept. was held.
1st year of the four-year high school course was opened.

1980 – The school held its first high school graduation with 50 graduates.

1983 – The first batch of Kinder pupils graduated in High School.

1989 – 93 – High School Department was recognized by the DECS as one of
the 250 top performing schools in the Philippines ranking 106th.

1991 – Construction of a three-story building started as a part of the
expansion of the school brought about by the demand to accept more and more students due to the influx of residents from the city to the subdivisions of Antipolo.

1992 – The newly-constructed St. Joseph building was inaugurated and
occupied by the Grade School pupils.
Our Lady of Peace School celebrated its 20th Foundation Anniversary.

1998 – Construction of the St. Paul Building for High School started.

1999 – Inauguration of the St. Paul Building was held.

2003 – 04 – Drafting and launching of OLPS’ strategic paths / directions and from that year onwards, the development of the institutional priorities namely, the Academic Formation, the Christian Formation and Formation in Social Responsibility was initiated by Sr. Felicitas Bernardo, SPC. Launching of the Flagship Programs in Reading and Math was done.
Bishop Gabriel Reyes, D.D. became the School Director.

2005 – 06 – OLPS passed the certification of PEAC-FAPE.
English and Science Learning Centers were created.
Major renovations were done leading to the creation of the Marian
Hall, the Kinder Playground, and the expansion of the Canteen and the Library.
OLPS Tawid-Tawid Community Extension School Extension offered Grade 1.

2008 – 09 – RCC-WBLS program was launched.
Renovation of the canteen and the Library, creation of additional
Learning Centers for Math and Science happened this year.
Robotics Laboratory was constructed.
Acquisition of 10 units of interactive boards for Kinder, Grade 1 classrooms, and Math and Science Learning Centers took place.
Re-certification of PEAC-FAPE passed with an average score of 3.95.
There was major Repair of the Riprap along Dela Paz St.
Construction of the electrical service drop and transformer was done.
The first Faculty Journal Volume 1, Series 1 was published.

2009 – 10 – Launching of the RCC-WBLS Activity Books (Telling and Re-telling
the Story of Jesus)
Conversion of the Marian Hall into classrooms was done to accommodate the 4th year classes.
The lot at the back of the cathedral was acquired for future expansion.
Consultancy Visit of PAASCU prior to Preliminary Survey happened on Oct. 3.

Rooms and offices were furnished with technology (DLP, Speakers, and Interactive Boards) and Air-conditioned units.
Implementation of the RCC-WBLS (Religion as the Core of the Curriculum – Whole Brain Learning System as the strategy) authored by trained faculty members was held. Construction of the Marian building: Gymnasium, Marian Hall and 10 additional Classrooms began.

2010 – 11 – The newly constructed Marian building was occupied
PAASCU Preliminary Visit was held on August 2-3, 2010.
OLPS was granted Candidate Status by the PAASCU on December 13.

2011 – 12 – Visit of Janie and Nancy Smith, ASDC CADRE, USA for the implementation of Understanding by Design (UBD) with Differentiated Instruction took place on July 29.
The Principal’s Office was transferred to the Grade School 1st floor to convert the room into Clinic and the former Clinic was converted to a Prayer Room. Construction of the Guidance Center in the Ground floor main building took place. The name Center for Integral Evangelization in MAPSA was changed to Christian Formation.

2012 -13 – An additional classroom was construction in Tawid-Tawid Community Extension School.
OLPS received the First Excellence in Educational Transformation Awards (EETA) by ABS-CBN Bayan Academy, REX Bookstore Inc., and Knowledge Channel Foundation, Inc. on Feb. 15, 2012.
The school held its 40th Founding Celebration of OLPS with the theme: 40 Years In Priming Great Leaders and in Sharing Christ’s Mission from Oct.23-26
11 Faculty members graduated with the degree of Doctor of Philosopy and 1 Master of Arts in St. Paul University-Surigao (SPUS) in March.
Re-organization of Alumni Association was done.
The implementation of K to 12 programs started.
PAASCU’s first formal visit was held on August 30-31, 2012.
PAASCU Level I Status was granted on Nov. 23, 2012.
OLPS Tawid-Tawid Community Extension School offered Grade 5.

2014 -15 – Application for the Senior High School permit was filed.
The construction of the Bishop Gungon building started.

2015 – 16 – Implementation of I-Ready program for English and Math and Robotics for Advance Classes started.
Six (6) Faculty members graduated with Master of Arts Degree from St. Joseph College on April 2, 2016.

2017-2018 – Completion of the first batch of K-12 Curriculum
First batch of SHS Grade 12 graduated
The High School Robotics Laboratory was relocated in the Bishop Gungon Bldg.
The Grade School Robotics Laboratory was set up in the Vicente Fernandez Bldg.
The Storage Room for chemicals was transferred to another room adjacent to the Chemistry, Biology, and Physics Laboratories.
The Asean Center was put up in the Vicente Fernandez Bldg.
Assessment and Enhancement Program of Scholastic was implemented in the Grade School.
The satellite library was put up on the 3rd floor of the Marian Bldg.

2019-2020 – OLPS was sent an invitation by FAAP and PAASCU to apply for Level
III Accreditation.
Additional Robotics Laboratory was put up for the SHS.
Maker Space rooms were prepared for Grade School and Junior High School.
12 Faculty members completed their MA at St. Paul University, Manila.
50 employees completed TESDA NC II on Housekeeping: 20 faculty and 30 maintenance personnel.
The SHS became member of the Junior Achievement of the Phil., Inc.
OLPS became a Microsoft Training Center.
OLPS submitted the documents for PAASCU Level III Accreditation.
OLPS held its first virtual graduation because of the Covid-19 pandemic. 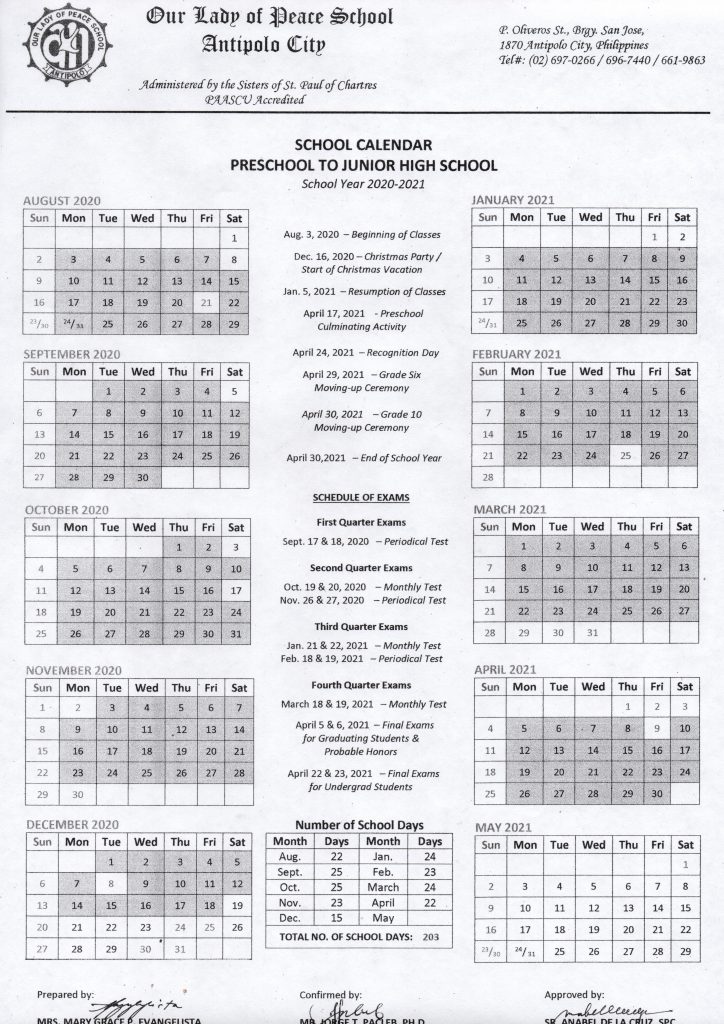 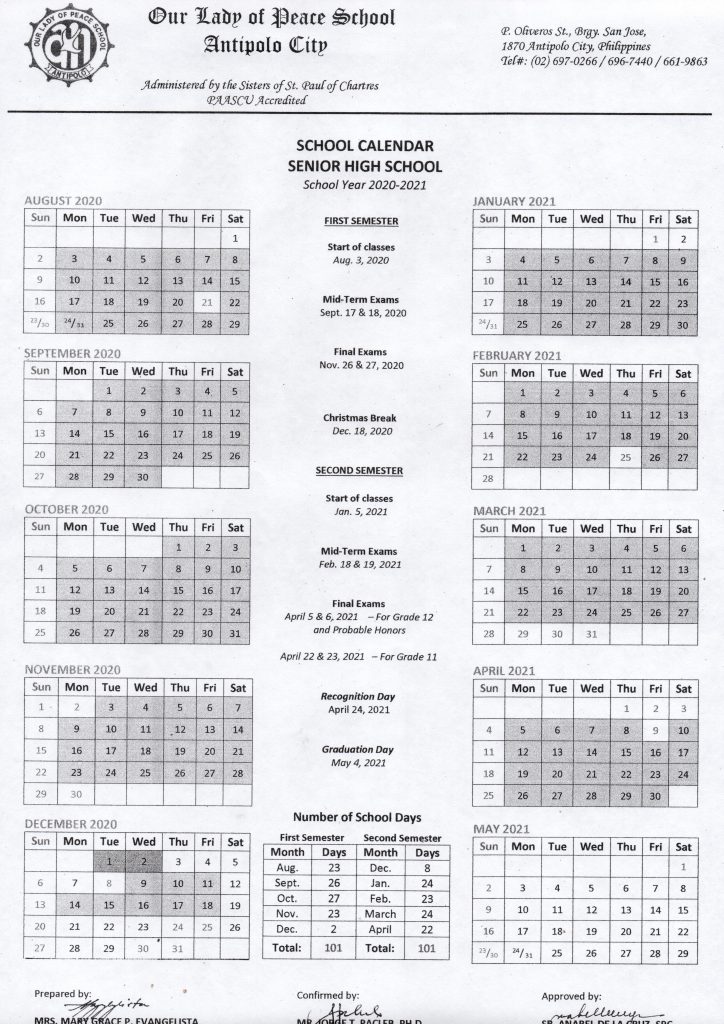 Our Lady of Peace School